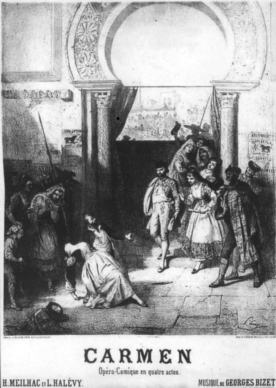 Carmen is an opera by Georges Bizet. The libretto was written by Henri Meilhac and Ludovic Halévy, based on a short story of the same name by Prosper Mérimée.

Although Carmen is nowadays one of the most popular operas, it was not very well received when it premiered in Paris on March 3rd 1875. The story was considered far too obscene for the stage. Act 1 was well received, but halfway Act 2 the mood changed and the audience was shocked by the final murder.

Bizet was depressed by the poor reception of his work. Later that month he developed a severe attack of quinsy. By the end of May he imprudently bathed in the Seine, after which he suffered an acute attack of rheumatism and high fever. On June 3rd, the day of his wedding anniversary, he died of a heart attack, exactly 3 months after Carmen's premiere.

It is sad that Bizet never knew how popular his opera would become in later years. It is also unfortunate that due to his untimely death, there is no agreed upon standard score of the opera. Although Bizet authorized the vocal score during his life, some modifications were made to the orchestral score, both by himself and by others after his death. For international productions, Ernest Guiraud replaced the spoken dialogue by recitatives and he also added ballets. Unfortunately, he modified Bizet's autograph score in the process, destroying some of the original material.

In 1959 the original orchestral parts, thought to be lost in a fire, were rediscovered. In 1964 Fritz Oeser published a new version based on this material, but he was criticized for including parts that had been discarded by Bizet himself even before the premiere. In 1992 Robert Didion published a version (Schott) that placed Bizet's vocal score highest in the hierarchy, thus representing the earliest stagings. In the early 2000s Richard Langham Smith published a version (Edition Peters) that represents how Carmen was performed at the Opéra Comique in the first decade after Bizet's death.

For my tracks I could only use scores that are in the public domain. I therefore used the version by Edition Peters published around 1924 and the original vocal score published by Choudens in 1875. I omitted all recitatives and also the pantomime in Act 1. Furthermore, wherever discrepancies occurred I used Bizet's autograph score to bring the instrumental parts as much as possible in agreement with the vocal score.